Christmas: Every day from November 24 to December 17.

Friday, Saturday and Sunday we also have stalls and children’s activities in the Christmas barn.

Buy your ticket when you arrive.

NB: Season pass apply for summer, Halloween and Christmas. There must be ID, so we can see that the card belongs to you.

You can of course buy season pass when you arrive at Birkegårdens Haver. But you can also buy season pass in the store before you leave and get your ticket refunded in the price.

Buy your ticket when you arrive.

Birkegårdens Haver is arranged as accessible as possible. The garden is landscaped with wide paths. Be aware that the substrate varies, from hard gravel to paths with small stones.

There is plenty of room for wheelchairs to get around in the café area and in the shop. And we have 2 large disabled toilets.

Accompanying Card
The accompanying card, issued by Danish Disability Organizations, allows you to include your helper for free.

Dogs are not allowed in Birkegårdens Haver, except for guide dogs.

Shaded parking spaces are reserved for cars with dogs. Remember that it gets very hot inside the car even on days when the sun only shines a little. There is a special area where you can walk your dog.

The dogs must of course be on a leash and you must remember to pick up after your dog!

You will find toilets by the shop and the Café Klokkeblomst. Two of these are disabled toilets.

Note the various hand-painted decorations all made by Merry Sørensen.

Where to breastfeed and change diapers

You are welcome to breastfeed your child in the gardens of Birkegården.
At the end of the shop, you will find a nice room where you can breastfeed, change a diaper, and the toddlers can play.
At the disabled toilets at the Café Klokkeblomst, you will find another diaper changing station.

Trolleys can be borrowed free of charge. Only 1 trolleys are available per family.

Birkegårdens Haver is the ideal destination for both large and small groups. You can experience our 5 beautiful gardens – from Denmark’s largest Japanese garden to Denmark’s most beautiful permaculture garden. In Café Tinkerbell we have room for most groups.

Write us an email and learn more; cafe@birkegaarden.dk.

Final number
Is announced no later than 8 days before the agreed date.

Find group menu on this site! 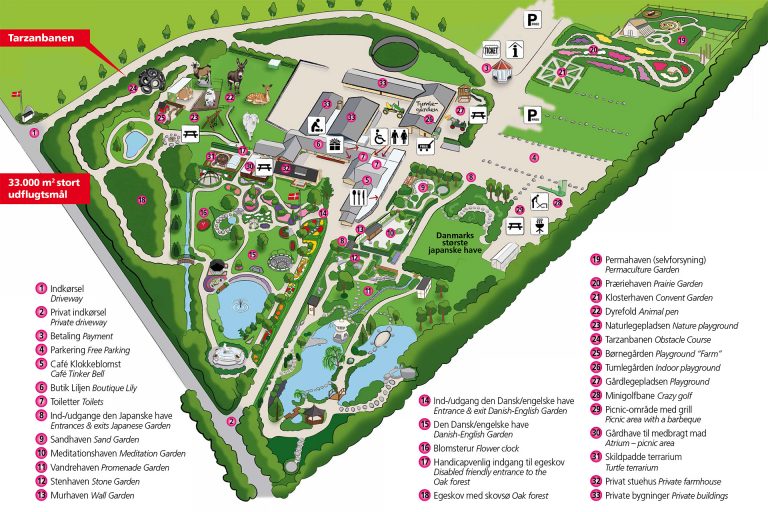 How it all began:

In 1970, Finn Sørensen bought Birkegården, which was then a small farmhouse with 10 pigs. From 1972 to 1978 they expanded the farm with land and buildings, so they ended up with 100 dairy cows and breeding.

Merry originally had neither special knowledge nor interest in plants but she had creativity and color sense.

It all started with Finn wishing for a small lake. The lake was excavated at an existing watering hole, and they laid lawn all the way from the farmhouse down to the lake. More and more people stopped and asked if they could see the garden. Then the interest in plants started and they built the Danish-English garden, which was opened for the public on July 1, 1996.

It became a great success, and already in 1997, they established the Japanese garden. In 1998, the Meditation Garden and Sandhaven were built. Later they built the convent garden, the prairie garden, and the latest garden, which is the self-sufficiency garden – a permaculture garden.

In recent years, Birkegårdens Haver has developed itself to not only be for guests with garden interest, but also for families with small and large children.

We hope you will enjoy a day in the beautiful, exciting and soothing environment!